Skip to main content
May 26, 2010
One Bad Poem
a craft essay by Bethany Reid

On August 29, 2005, I decided that during the remainder of my summer break from teaching I would write one poem each day. My daughters would go back to school in a day or so (they were twelve, twelve, and six), leaving me some leisure in the month before classes began at my college. I had undertaken this practice before and called it “one bad poem” after something I once read in a self-help book, Wishcraft, by Bonnie Sher and Annie Gottlieb. In short, Sher and Gottlieb advise that if perfectionism keeps you from a goal, you must vow to do whatever it is you want to do--ballet, sailing, quilting, going to law school--badly. So my goal was not to write one splendid, brilliant poem per day, but simply to get up early every morning and write a draft of a very bad--terrible, if need be--poem.

My friend Glenda, who is also my massage therapist, had watched me go through this process before, and found the title “One Bad Poem” unnecessarily self-deprecating. She wanted me to call it, “One Rich Reflection on the Day.” Sometimes it does turn out to be a rich reflection. Sometimes it turns out to be splendid and brilliant. But the inelegant idea of a bad poem is what gets my notebook and pen out. How can I fail? When I saw Glenda the day before classes began, that fall of 2005, she asked me how I was feeling, and I told her I was sad because the next day I would be giving up writing my one bad poem. She said, “Don’t give it up! Keep writing!” Glenda is tall and willowy. She has dark eyes that crackle as often as they twinkle. I complained--I won’t have time, I’m so busy, 80 to 100 students, not to mention three daughters. She would have none of it. “You have all the time there is,” she said. “Write the poem. Everything else will be a snap.”

It wasn’t always a snap, but each day I wrote a poem and I typed it up; I put a date on it, and I put it in a notebook. I thought I’d keep up the practice for one more month, just until I saw Glenda again. Then I had a poetry reading scheduled for December third, and that became a target for when I could quit. December third came and went and I kept writing. From August 29 to the end of December I missed only two days. I wrote 123 new poems—bad poems, perhaps, but poems.

Like many writers, I have for a long, long time attempted to write every day. I write in a journal anywhere from a short entry of a few lines to three or four pages. The one-bad-poem practice did not replace journaling--what I usually call “scribbling”--and differs significantly. My journal is where I go to gripe about my kids and my husband, and sometimes to brag about them. I cry on my journal’s shoulder about the washing machine not agitating right and about the freezer going out. I list things to do and things accomplished. I write about my students and my friends and the weather and what my sister said yesterday. Some of my journal entries lead to poetry, but they are not poetry. The journal is a repository, a way I have of clearing my mind so that I can get on with the day. Poems, even bad poems, feel quite different to me.

So where do the poems come from? That first fall, when Hurricane Katrina swept her way through New Orleans, I wrote a number of poems about floods, real and metaphorical. I also worked themes of heaven, marriage, housecleaning, horses, Eden, teaching, and children. I worked each theme as if it were a vein of rich ore that I was trying to chip out of myself. Some days I felt stuck. On one particular morning that first fall I gave up and checked my email. Afterwards, I wrote the first draft of this poem:

MY MOTHER EMAILS ABOUT HER NEW DISHWASHER

“The dishwasher is plumed now.”

When the plumber opened its box,
the dishwasher strutted out, eyes bright
as glass beads, tail feathers of emerald

and turquoise fanning
over pale linoleum. When it leapt
shrieking to the china cabinet,

my mother and the plumber
had to coax it down--Cheerios
and Quaker Oats, a stalk of celery.

And so the dishwasher took its place,
hunkering beside the sink.
The stove stretched a striped paw

and growled. My mother paid
the plumber. She tied her apron on
and set to making supper.

Recently I’ve been “unwriting” poems--taking a first line or basic premise from someone else’s poem and then going in the opposite direction. Here is one starting place, lines from Rainer Maria Rilke’s “I Am Much Too Alone in This World, Yet Not Alone” (translated by Annamarie S. Kidder):

I want to unfold.
Nowhere I wish to stay crooked, bent;
for there I would be dishonest, untrue.
I want my conscience to be
true before you;
want to describe myself like a picture I observed
for a long time, one close up,
like a new word I learned and embraced,
like the everyday jug,
like my mother’s face,
like a ship that carried me along
through the deadliest storm.

And the one-bad-poem I wrote in response:

Today I would like nothing better
than to be folded,
folded like a note slipped into a book
to mark a page you don’t want to forget,
or folded like a sheet tugged from the clothesline,
in half and in half again.
I want to be folded the way egg whites
are folded into a meringue,
like sheep into a fold,
like an origami bird,
like a dollar bill into a coin purse.
Later you can take me out, unfold me,
smooth my edges and spend me
on something unexpected and delicious,
a peach or a packet of art paper
or a bar of dark chocolate
folded into its envelope of foil.

Another fertile source for new poems is, of course, my own notebooks. Failed poems make great starts for new poems. Good poems do, too. I sometimes set myself the task of using the same opening image several days in a row, or, while leafing through the typed poems, I’ll stop and draft a new poem beside an old one.

Each year that I have been writing my one bad poem per day, I’ve been able to salvage about fifty poems, to see at least that many through to some form of completion that made it possible to put them in the mail to literary magazines and journals. The result has been, over four years, more than forty published poems, two awards, and four nominations for the (still elusive) Pushcart Prize. I don’t have a new book of poems forthcoming (how I wish) but I have started a poetry blog, which you can visit at www.awriters alchemy.blogspot.com. The writer’s alchemy address was a false start--of course it’s titled “One Bad Poem.”

As my daughters have grown older, finding time to write has become more complex. They go to bed later and later, and I find it more and more difficult to get up early. Nevertheless, my one-bad-poem practice has kept me writing. Somehow, despite having three kids and a husband and elderly parents and friends and a teaching career, every single day I pick up my notebook and I write one bad poem. So far, so good.

I’m keeping myself as compact
as possible, a neat little house
with the doors locked
when the poem opens like a window
and in comes all this stuff I hadn’t planned on--
light and birdsong and the sound
of traffic. Or the poem
isn’t the window; it's everything outside
the window. The poem is a tree,
a dogwood or maple or cedar.
The poem is the breeze toying with the leaves
of the dogwood and the maple and the cedar.
The poem is the rattle
of the smaller shrubs, the salal
and Oregon grape, as the raccoons scurry through.
The poem is the motion behind
the raccoons, the mother who is large
and a little scary,
her kits who trundle after. But now
I am no longer a house. I put on
a jacket and shoes. I crawl through the window
that the poem left open as it escaped.


NOTES:
An earlier version of this essay was offered on June 11, 2009, as a craft talk for Esther Helfgott’s It’s about Time poetry series at Ballard Public Library.

I found the Rilke lines at www.poets.org. Other on-line sources I visit frequently are poems.com (Poetry Daily) and www.duotrope.com (Duotrope Digest), both good portals to lots and lots of journal and small magazine websites.

A revised version of my poem "Folded" was accepted for Phrasings IV (2010), a dance and poetry production sponsored by Chuckanut Sandstone Poets and the Bellingham Repertory Dance Company.

Bethany Reid teaches creative writing and American literature at Everett Community College. She is fully aware that she is not the only, the first, or the most interesting poet to embrace a daily writing habit, but she hopes she’ll inspire someone out there who is as busy as she is to give it a try.

My friend Carolynne sent me this poem. It made her remember how important friendship is, and I can feel that, too, but where it really sent me was to my days as a waitress, before I found love, before I married and had children. Funny how a poem can feel like a transport to another place and time I have almost forgotten -- waiting on a family dashing in for hamburgers between games in their son's Little League playoffs on a Saturday afternoon -- driving home one evening through a quiet neighborhood and seeing the lights in other people's kitchens and dining rooms. Night Walk The all-night convenience store's empty and no one is behind the counter. You open and shut the glass door a few times causing a bell to go off, but no one appears. You only came to buy a pack of cigarettes, maybe a copy of yesterday's newspaper -- finally you take one and leave thirty-five cents in its place. It is freezing, but it is a good thing to step outside again: you can 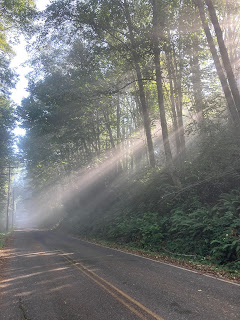