I have been writing comments on student papers all day, in fact, for several days. This morning when I returned to my office at the college, I found a strange little book on my desk, Writer's Block, and a cryptic note, signed, I think, by my friend Marianne. Here's a quote from the book:

"Ironically, when asked to write about writer's block, I'm at a loss for words," says Phil Gulley, a Quaker pastor as well as the author of the best-selling essay collection Front Porch Tales and the fictional Harmony series. "Fifty sermons a year for the past 18 years, 9 books in 11 years, and not once have I fallen silent. I sit at my desk and the words come, sometimes slowly, but they eventually arrive. To be sure, some of my efforts lack a certain sparkle, but I've never missed a deadline.
"Writer's block, I'm coming to believe, was a myth begun by underappreciated authors who wanted to make their craft look harder than it is. I once picked up road kill for a summer. After a week on the job, I developed road kill block. I did all I could to avoid the task. Phoned in sick, vomited in the boss's truck, and spent evenings looking for another job. But this was in the early Reagan years, jobs were scarce, so I returned to the road kill.
"Since then it has been etched in my psyche that if I fail as a writer, I would have to return to my road kill job. With an incentive like that, I can't afford writer's block.
"My biggest worry isn't that I'll run out of things to say, but that I'll run out of time to say them, that God, in his peculiar way of doing things, will yank me from this world before I've thrown in my two cents.
"I have a friend who writes for a living who is regularly cursed with writer's block. He's lived a pampered life, is independently wealthy, and can easily afford such luxuries. When words fail him, he goes to Tuscany for a month to play golf. Someday, I hope to be able to have a writer's block like that." 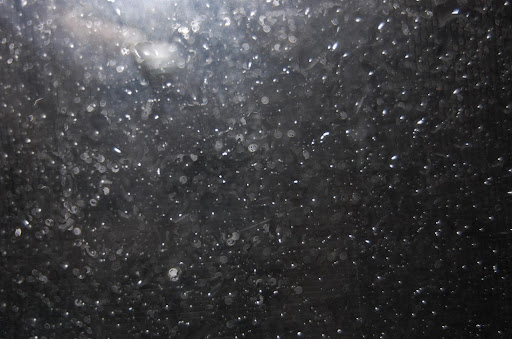 My friend Carolynne sent me this poem. It made her remember how important friendship is, and I can feel that, too, but where it really sent me was to my days as a waitress, before I found love, before I married and had children. Funny how a poem can feel like a transport to another place and time I have almost forgotten -- waiting on a family dashing in for hamburgers between games in their son's Little League playoffs on a Saturday afternoon -- driving home one evening through a quiet neighborhood and seeing the lights in other people's kitchens and dining rooms.

Night Walk
The all-night convenience store's empty
and no one is behind the counter.
You open and shut the glass door a few times
causing a bell to go off,
but no one appears. You only came
to buy a pack of cigarettes, maybe
a copy of yesterday's newspaper --
finally you take one and leave
thirty-five cents in its place.
It is freezing, but it is a good thing
to step outside again:
you can feel less alon… 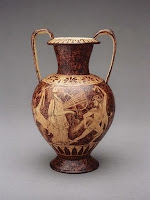 Everything Has Two Handles

I tried to explain this to my students this morning and botched it badly, so here it is, fresh from my copy of The Art of Living: the Classical Manual on Virtue, Happiness, and Effectiveness,by the Stoic philosopher Epictetus:

"Everything has two handles: one by which it may be carried, the other by which it can't. // If, for example, your brother or sister treats you poorly, don't grasp the situation by the handle of hurt or injustice, or you won't be able to bear it and you will become bitter. Do the opposite. Grasp the situation by the handle of familiar ties. In other words, focus on the fact that this is your brother or sister, that you were brought up together, and thus have an enduring, unbreakable bond. Viewing the situation that way, you understand it correctly and preserve your equilibrium." (Interpretation by Sharon Lebell, 71) 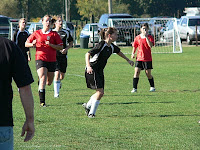 Time for another poem? Here's one from my persona as soccer mom.

We walk onto the astroturf under a gray sky.
Another soccer season begins, gnats,
a light rain, children shouting.
If a soccer ball were a crystal ball
there's only one future it could reveal:
this game and next week's and the next,
an endless parade of pony-tails.
More bottles of water. More jerseys.
More white socks. But it's okay,
I'm happy with sameness. What else
would I be doing with the afternoon?
I would have all these girls young forever
prancing across the field, running to shelter
under my umbrella. We were made for this,
to cheer on our children, to applaud when the ball
slips into the net for our team. To shout
encouragement when it doesn't.
Some other poet said it better, but let no god
hear my grousing and think I mean it.
Let me stand here on the sidelines cheering
for as long as my girls need me.
Let them need me a long time.